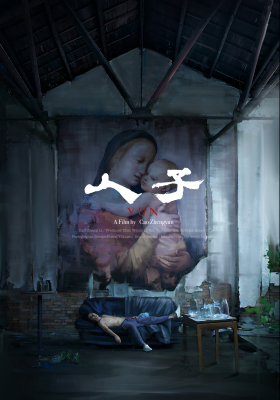 Story:
This film describes a wandering young man who experiences the alternation of reality and dream mirror after regretting the loss of his beloved. Finally, he successfully understands the root of pain, accepts the reality and obtains salvation.

The inspiration for the short film came from an illustration: in an picture, a boy was half-submerged in the water, and a tree was burning not far from him. In this picture, the lake, the burning tree, the boy's back -- several pure elements make up some wonderful poetic quality. The director starts to imagine and supplement the content beyond the finished picture. Questions are that why the boy come to this place far away from the city, why he look so sad, and what burning trees mean to him. The Son of Man was born by this trend.

Wang Yun is a distinctive youngster. It was as if he had been born in a small city in southern China. His mother (though the audiences were not given a chance to confirm her existence) lived with him in the ruins of an instrument factory. This kind of setting is all about cutting out unnecessary information from the very begining, thereby creating a pure space and a fictional reality. Audiences can imagine that Wang Yun is a non-modern man out of touch with society. He doesn't have a cell phone, his only electronic device is a recording pen, and he may not even have gone to school, and growing up in ruins and woods. By deliberately removing these social biases, in director's belief, the character of Wang Yun is extremely pure. From beginning to end, Wang has been the absolute protagonist of this story. In fact, the construction of this sort of thinking reflects the thoughts of many young and inexperienced. Under the influence of original family, China's only child born in the late 1980s generally lack brothers or sisters acting as reference coordinate of life development, that is, they cannot reflect on their own growth trajectory by comparing themselves with others. This kind of individuals are lonely, self-centered and unseeing. This generation are even internally divided to some extent. Like water and fire, these two natural elements, which could not be integrated originally, are in the inner world of the director and the group he represents. However, these two elements happen to be the two sides of the coin, and they possess a mental imagery landscape that is pure, contradictory but poetic. Vico has called this way of thinking as "poetic wisdom". It has two features: First, the imaginative sortal concept; second, the anthropomorphic or personal metaphor. In this regard, in Son of Man, the director designed that Wang Yun held his mother's body, came to a lake, ignited and gave out sound and fury silently, and it is a deep thinking over what the "self" of this group is, why the "characteristics" we have are what we are, and where the "end" is.

This film describes a wandering young man who experiences the alternation of reality and dream mirror after regretting the loss of his beloved. Finally, he successfully understands the root of pain, accepts the reality and obtains salvation.
0:00 0:00