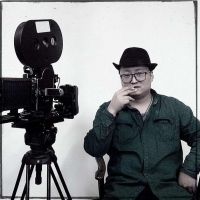 Chinese director, playwright, painter and poet. Creator of Beijing Yongshengtaihe Media Co. Ltd (since 2015) Born in the late 1970s, Tao Han is a multi-talented artist who creates art in all aspects, including screenplay writing, film making, oil painting, graphic arts, installation arts, Chinese painting, and exhibition curating. In 2003, his documentary Baby was shown at China Triennial of Art. In 2006, his Big Fog, written and directed by himself, was selected to screen at the 32nd Hong Kong International Film Festival as well as the Munich International Film Festival in 2007. In 2007, he curated the 'Breathe. Shandong Contemporary Art Exhibition'. This was the first grand contemporary art exhibition in Shandong Province and marked as one of the most important exhibitions in the current Shandong contemporary art circle, as it gave a clear clue to understanding the history of the Shandong contemporary art development process from 1979 to 2007. The album Breathe was also published. In 2009, he curated the opening exhibition (contemporary section) for the Sunshine International Art Museum. In 2011, he edited the contemporary art part of the History·New Songzhuang, 20 Years, the most important literature on the history of Songzhuang art development process. In 2013, his installation art Rainbow Tower was displayed at the Chinese independent project 'Culture, Spirit and Production' during the 55th Venice Biennale. In 2015, his The Missing was screened at the Hamburg International Film Festival, the 12th Beijing Independent Film Festival competition section and Atlanta International Documentary Film Festival, etc. The Missing won the K26 Experimental Film Prize at Hamburg and won the Silver Prize at Atlanta.